The photo shows a market on the right-hand corner of the Upper Market, Rynek Górny, in Bodzentyn, close to the Catholic church (ca 1918–1939). Find the location on Google Maps

The majority of the Jews were poor. Most of them were craftsmen and tradesmen. Commonly there was a dwelling at the rear of a shop, which faced the street. In addition to shopkeeping, the Jews also earned their living as artisans of every sort, coppersmiths, carpenters, leather workers, cap makers, tailors and cobblers, to name a few.

Jews in Bodzentyn leased and owned several mills and sawmills. Wood-related trade seems to have been the largest source of income. They owned stores for ironwares, farm tools, and farm implements, grocery and grain stores and also participated in fairs held regularly for trade in horses, cattle, grain and many craft products.

"The hustling and milling about and the bargaining were very lively and noisy, and continued through most of the [market] day."

Of course, not all of the Jews in Bodzentyn and its surroundings were tradesmen and businessmen. Some of them were doctors and dentists; others ran small farms with agriculture. There were also Jews who earned a living by transporting goods and people between Bodzentyn and Kielce, the nearby provincial capital.

A horse driver is waiting at Rynek Dolny, in the early twentieth century. In modern times busses appear at the same place. On the left is the building of the Primary School from 1918.  Find the location at the Lower Market, Rynek Dolny (Plac Żwirki) on Google Maps

In the 19th century, several of the Jewish tenants in Bodzentyn ran nearly all the taverns. Others made a living as butchers, bakers and tanners. Some were well-educated, as medical assistant Abram Fryzeman. He came to Bodzentyn in 1819. His son-in-law, Majer Szuch, also served as a medical practitioner, providing a wide range of services. The mayor testified that the two Jewish barber-surgeons saved many lives, not least during the cholera epidemic of 1827.

"SALE / FRUITS and SWEETS / Gela Sztarkman." The original sign of one of the shops run by a Jewish family in Bodzentyn. Read about the fate of Gela Sztarkman in the section The destruction of the Jewish community

The main handicraft performed by both Polish and Jewish residents was shoemaking. In addition, many Polish residents were carpenters and butchers. Since the Jews were keeping a kosher kitchen there were of course also several butchers among the Jews performing the religious slaughter. In the Jewish community, there seems to have been an abundance of tailors, not allowing any of them to make a good enough living.

The photo shows the Upper Market Square, Rynek Górny, in the early 20th century and in 2011. Find the location on Google Maps

The Upper Market Square, Rynek Górny. In the photo from right to left: Lower Grade School, Cinema ("People's House"), Fire Station. Further to the left is the Apothecary (not captured in the photo but still in place at this location and visible on the Google Maps link). The photo was taken sometime in the 1950s. Find the location on Google Maps

The Jews and Poles of Bodzentyn were mutually interested in the safety of their little town, thus they united their forces in the local fire brigade. There was indeed a serious occasion in 1917 when the flames threatened to consume most of the houses. In the fire many people lost their dear homes; also the synagogue was destroyed. 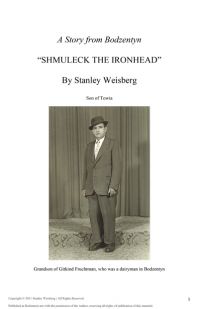 > A Story from Bodzentyn: "Shmueleck the Ironhead" by Stanley Weisberg, written in an Isaac-Bashevis-Singer writing style. 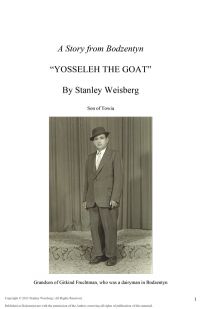 > A Story from Bodzentyn: "Yosseleh the goat" by Stanley Weisberg, written in an Isaac-Bashevis-Singer writing style. 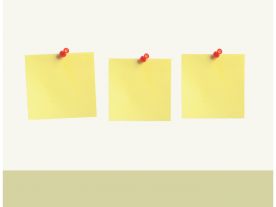 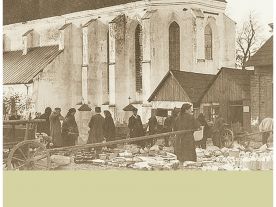 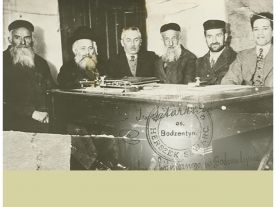 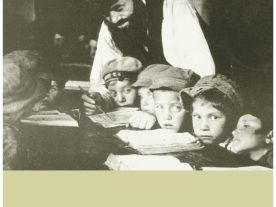 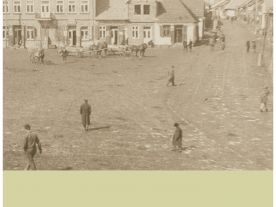 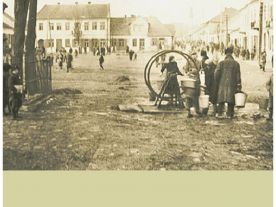 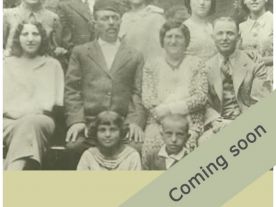