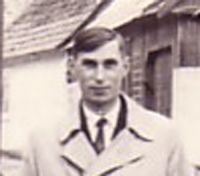 Stefan Rachtan in the early 1960s.

© Private archive of the family

In this article, regionalist Stephan Rachtan describes the situation in Bodzentyn, Poland, during WWII. He also recalls the Jews of his neighbourhood and scenes from his childhood in Dąbrowa Dolna and Bodzentyn.

The Germans entered Bodzentyn on 6 September 1939. Hiding in the dense forest, resistance groups were formed. Similar groups were organized in the nearby villages. In March 1943, the Bodzentyn group was transformed into the partisan unit Chlopcy z Lasu (The Boys from the Forest) and joined the Home Army that was loyal to the Polish-government-in-exile in London.

During the spring of 1943, some units of the underground army executed several sabotage operations. In revenge, the Germans pacified the villages. Many partisans lost their lives. The main spot for the partisan movement was the Wykus camp in the siekierzynski forest with the famous commander Jan Piwnik “Ponury”. In 1957 a memorial chapel was erected to commemorate those who fought for Poland's freedom and independence.

Every year, a special ceremony has been held in June to pay homage to all the soldiers. One of the famous soldiers belonging to the Home Army was Marian Świderski, "Dzik", and Eugeniusz Domaradzki "Grot", from Bodzentyn.

The Kielce-Radom district radio operators routinely communicated with the headquarters of the Home Army. During the autumn of 1942, the radio station was moved from Kielce to Bodzentyn. Later on, it was transferred from the Palysiewicz family's house in Bodzentyn to the guerrilla camp in Wykus. On 28 October 1943, those soldiers responsible for protecting the radio station were rounded up and killed. Only the commander with few soldiers and the radio station was saved. A monument in the churchyard commemorates the death of these 28 men.

Between 1943 and 1944, a German military post was set up on the presbytery premises in Bodzentyn, and the basement was set up as a prison. Prisoners were often tortured until they confessed to the crimes and then transported to the main headquarters of the Gestapo in Kielce. At least 30 people were killed on the execution spot behind the wall of the churchyard. There are two tablets to commemorate those horrific events: one on the presbytery and another on the spot where executions took place.

"Jews were prohibited from attending school. Poles could attend only elementary school to learn basic skills such as reading and counting. However, it was forbidden to study Polish literature, geography and history."

After the outbreak of WWII, Jews were prohibited from attending school. Poles could attend only elementary school to learn basic skills such as reading and counting. However, it was forbidden to study Polish literature, geography and history. There were brave and devoted teachers who took up the dangerous task of clandestine teaching. Despite the threat of capital punishment, teachers, mainly from Kielce, formed groups of students in Bodzentyn and nearby villages and taught them French, German, Latin, among other subjects. One of the most distinguished persons responsible for this teaching was Antoni Wacinski. In 1999 The Society of Graduates of Secondary School dedicated a tablet on the local Lyceum wall honouring the teachers.

Bodzentyn was in the centre of the underground partisan movement. In retaliation for the guerrilla activities, Bodzentyn and surrounding villages met fierce repression in the spring of 1943. The most horrific event of "pacification" took place on 12 and 13 July in Michniów. More than 200 people were killed, most of them burned alive.

Site of the execution that took place on 1 June 1943. The Czernikiewicz family home still exists today.

On 1 June 1943, 39 people were killed in Bodzentyn. The Germans had entered Bodzentyn at night. In the early morning, they started to drive people out of their houses to the lower marketplace, Rynek Dolny. People found in hiding were shot on the spot. At the marketplace, the Germans announced names from a list of those that were to be killed and divided people to the left and the right.

The elderly and sick were shot on the spot. The others were forced to walk to the backyard of the Czernikiewicz family home. Those who had been sentenced to death began to cross themselves; the son blessed his father with the sign of the cross, and the father blessed his son with the same sign.

A firing squad killed the men. After the execution, one of the German soldiers ordered the people to thank the Germans for killing the bandits. Then they were ordered to disperse. In 1945 the bodies were removed from the Czernikiewicz family's backyard and reburied at the parish cemetery. A year later, a monument was erected in honour of their memory.

© 2011, 2021 All Rights Reserved by the author Stefan Rachtan, in translation from Polish to English by Krystyna Rachtan, and the Editor.

What do you recall concerning the Jewish community in Bodzentyn?

– I didn’t live in Bodzentyn but in the nearby village Dąbrowa Dolna, which is about 2 km from Bodzentyn. My parents were farmers and we had a small farm there. I remember those who came to Dąbrowa to buy goods from local farmers. I remember that in the summer they bought fruit from our neighbours, that is the fruit which still grew on the trees. Then they collected the fruit and took it to Bodzentyn [to sell on the market]. They were dressed in long "robes" and the elder Jews had beards and sidelocks.

– During the war we, children, were often sent to town to do the shopping. I think it could have been in 1941 or 1942 … but most probably during the winter in 1942; I remember such a scene – I am sure it was a shop in Rynek Dolny – The Lower Market Square, (today it is a private house at 10, Zwirki and Wigury Square), I saw a group of the Jews praying. They were in a room at the rear of the house. I came there to buy salt or sugar and through the open door, I could see them in their typical religious outfits praying aloud. I think it was in the winter of 1942 when the synagogue was closed because the Jews from Plock stayed there. Then the Jews gathered in private houses to pray.

"The Germans indeed wanted to kill them next to the fence of his farmhouse."

– I remember another scene connected with Dawid Rubinowicz' diary. On 1 June 1942, he wrote: "This morning two Jewish women, a mother and a daughter, had gone out into the country. Unfortunately, the Germans were driving from Rudki to Bodzentyn to fetch potatoes and ran across them…. They intended to shoot them on the spot, but the mayor didn’t allow it. Then they went into the woods and shot them there…." The village administrator Wladyslaw Imiolek was our next-door neighbour. I am probably the last living witness to this tragic scene. The Germans indeed wanted to kill them next to the fence of his farmhouse, but he begged them not to do it there. I still remember the horror: Their cry and the fear of what would happen.

Source of the interview

Recollections
See more
This site uses cookies to improve your experience. Cookies are small blocks of data created by your web server while you are browsing this website and placed on your computer or other devices by your web browser. Accept